Got back into pro wrestling after a ten year hiatus when I was on Twitter and saw WWE champion CM Punk trending for challenging rapper Chris Brown to a fight because he disapproved of Brown’s attitude and apparent lack of remorse over his mistreatment of former girlfriend Rihanna.

As is often the case with YouTube, I got sucked in to all the related videos and before I knew it I was heavily engaged in an investigative mission to find out whatever became of all my favourite ‘superstars’ from when I was watching it: who’s still there, who’s still there, which of the guys who were just up and coming when I was watching it are now the main guys and whether any of the new guys were any good.

Also as is often the case with YouTube, the filter bubble kicked in and the ‘suggested for you’ section decided that wrestling was the only thing I was interested in. [You think you know me, YouTube – but you don’t!]

So you’ve been watching wrestling then, so what?

Pro wrestling gets a lot of criticism for its crude storylines, fixed matches and a reputedly simpleton audience. The predetermined nature of the matches leads people to dispute the description of wrestling as a sport. Even the WWE refer to the activity as ‘sports entertainment’ these days. But I’d say it is a sport.

Pro wrestling is the sport of marketing in its purest form. Performers don’t get to the top by random chance. They don’t even get there because they’ve been chosen by event organisers to be the ‘next big thing’. They might get a push from the company, but it’s up to the wrestlers themselves to connect with the audience, and this is what you need to do if you run a business and want to take things to the next level.

How much panache do you have?

The differences between the various wrestling promotions is vast, from basic amateur matches in local gyms to the enormous budgets of the WWE. While advertisers such as myself argue that a glitzier, higher budget campaign will do wonders for your sales, it can often be difficult to quantify the results.

Guy on a handheld digital camera promoting a match (just not the same):

What have you got to brag about?

WWE shows feature a number of ‘did you know?’ sections throughout where they tell viewers all about what how much higher their ratings have been than other shows on TV, how many videos they’ve sold, how great their social media stats have been, how many beanie hats they’ve sold etc. In the case of the one above, it’s not just about what they have done, but about what they’re going to do as well.

What are your plans for this year? What did you get done last year? Tell people about it and you’ll create a buzz.

Do you have a story to tell?

Sure, there are a lot of people that watch wrestling for the matches, the technical and athletic skill of the performers and so on, but the way that people get most interested in the matches is because there is a storyline leading up to them. Storylines are usually quite straightforward ‘good guy, bad guy’ scenarios but they are the things that draw interest from people to what is technically the product that the wrestling promotion is ‘meant’ to be selling – the matches.

What steps had to be taken to get you to where you are today? What are you all about? Are you an antiques dealer or are you Indiana Jones? The way you tell your story will directly affect engagement with what you do.

How can people interact with you? 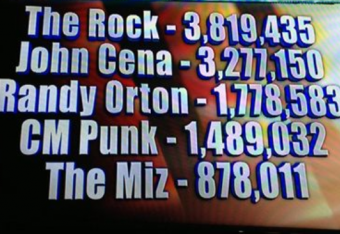 I mention this initially because it was Twitter that got me watching wrestling again but WWE’s social media campaign is fantastic. Performers big themselves up and give each other a bit of smack talk on the run up to matches via Twitter and YouTube, people can vote using hashtags on what they want to see on the show and they can send in videos of their points of view via wwe.com’s ‘Tout’ feature, not to mention that they get the opportunity to interact with their favourite stars.

Now, you may not work in an industry where getting on Twitter and saying that you’re going to go and kick your competitors’ asses would be the done thing (although, I’ll admit it could be fun to watch), but getting out there, telling people what you’re all about and getting them comfortable with interacting with you is moving from being a gimmick to essential marketing strategy every month.

There are basically three different levels of wrestler in any wrestling promotion: the main eventers, the mid carders and the jobbers (‘jobber’ is wrestling lingo for guy that loses all the time to make the other guys look good).

The jobbers tend to just go out and wrestle, and unless they have truly remarkable talent at what they do, will tend not to get noticed by the crowd.

Mid carders tend to have gimmicks. Whether it’s as a ‘dancing funkasaurus’ or as a high flying risk taker, these characters entertain the audience but tend to be quite 2 dimensional.

However, at the top of the sport are the guys that mix in the showmanship with a healthy lacing of reality about the tough industry in which they work and who add depth to their characters while showing a genuine passion for what they do.

This promo between top guys CM Punk again and my old favourite, the Rock who’s returning to the business basically sums up my point before they start going so in depth about ice cream.

So, how much depth does your brand have? Do you do your job every day and then go home at the end of it, and remain as a local level business player? Or do you add something extra to it, whether it’s humour, flair or friendly service? Or do you take it to the top level and engage people in a way that goes beyond the product or service that you are aiming to promote?

How much do you want to succeed?

Sure, the results in pro wrestling are usually predetermined, and this article is unlikely to have converted anyone who isn’t already a fan of it to watching it all the time. However, it might give you a few ideas on how to predetermine your own results in the future.